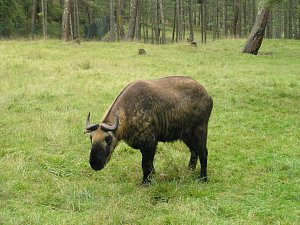 This enclosure on the edge of the Thimphu is designated to give safe haven for takin, national animal of Bhutan. Botanically called Budorcas taxicolor whitei, takin is endangered animal living only in Bhutan and surrounding areas of China and India.

The purpose of preserve is to provide safe places animals, which were living in forests surrounding Thimphu and which became gradually accustomed to people and even started roaming the streets. Some stronger animals are from time to time being released to nature. Apart from takin, sambar and musk deers are also kept in the enclosure. It's usually wounded animals which are held captive until total recovery.

It's quite easy to spot takin while visiting preserve. Animals do often wait for tourists and their guides, who will fed them their favorite grass, which is yet fully grazed in enclosure.

Takin is very unusual animal, resembling both goat and cow. The local legend attributes the emergence of takin to popular saint Drukpa Kuenlay, who was great fond of meat, but always after eating the animal, he used his spiritual power to give it life again. Once he was offered body of cow and head of the goat. After the saint finished his meal, he said his magic formula over the bare bones and turned that alive. Thus the takin was created.

Anyway as per biological research, takin is actually more akin to sheep then the goat or cattle. One of the very interesting features is it's migratory behaviour. The takin will climb to higher meadows up to 4 thousand meters high in the summer but will spend winters in elevations below the two thousand meters, migrating twice year in herds of tens.

There are few households around the enclosure and their female inhabitants are producing and selling nice scarves made of cotton, raw silk and silk, selling that for quite reasonable price.

No photographs available for this.