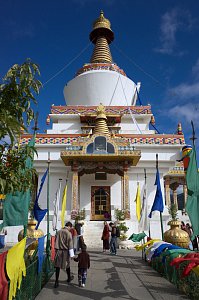 This Chorten (or stupa) in the center of the Thimphu town was built in 1974 to honor the third king of Bhutan, Jigme Dorji Wangchuck (1928-1972) who is remembered as father of modern Bhutan.

Chorten is built in Tibetan style and quite atypically it has three storey temple inside. Interior is richly decorated with statues of Phurba (Vajrakila), the exorcist deity subduing evil. Allegedly this is to eliminate the perceived curse which caused third king's untimely death. Pictures of the third king and his mother, who sanctioned building of the monument, are located in the base floor. If you climb up to the third storey, you might be permitted to peek outside from the top of the chorten and take a snap of the circumbulating and prostrating devotees.

Regardless of what time you come here, there would be people, especially elders, praying, making rounds around the stupa, prostrating and turning large prayer wheels to accumulate merit. In the evening, the chorten is nicely floodlit. 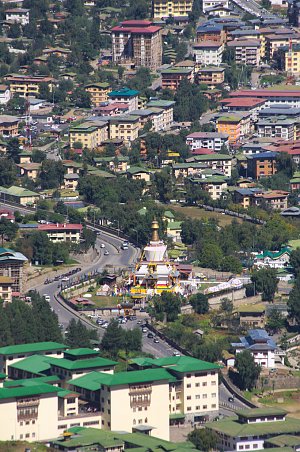 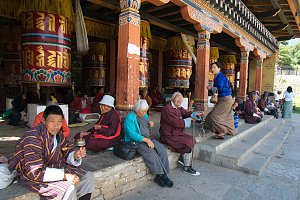