Bhutan has recently flashed the international headlines due to ongoing stand-off between Chinese and Indian armies on the obscure mountain ridge disputed between Bhutan and China. Mountainous territory called Doklam, Dokola or Donglam lies on the tri-junction of Bhutan, Sikkim (India) and Tibet (China). Many articles from different perspectives were written since mid-June when the crisis broke out. Stand-off is often described as the most serious Sino-Indian hostility in the last 15 years. Many commentators from India and China alike expressed rather aggressive and threatening attitudes, invoking the fears of the possible clash between two nuclear giants. Should you be worried to visit Bhutan then? The short answer is resolutely NO. For long answer please continue reading below. 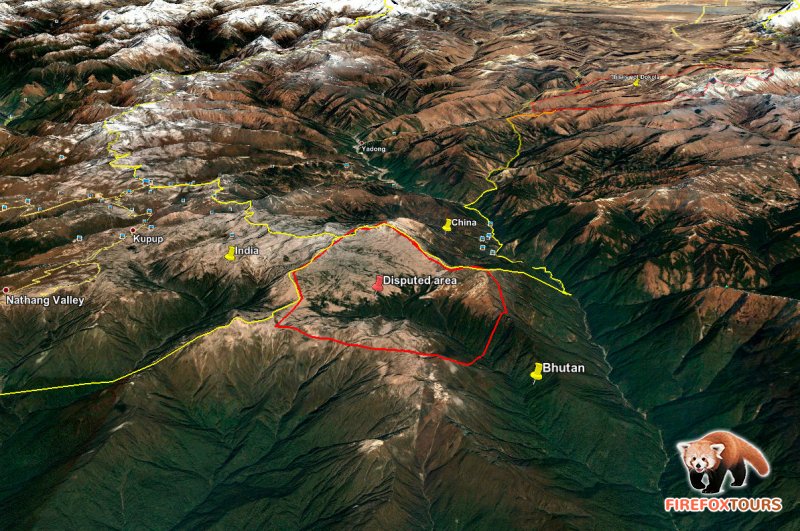 On 20th June Bhutanese issued diplomatic démarche addressed to China protesting against the incident. The Bhutanese side reasoned, that existing treaties between China and Bhutan prohibits any activity in disputed border areas which can affect the existing status quo.

Around the same time Indian army entered disputed territory from it's nearby base and disrupted the works. Subsequently Chinese army also stepped in and that's how the whole stand-off started. Number of troops present on both sides is unclear but it probably counts from tens to few hundreds. Anyway the huge military build-up of both countries is prepared in Indian Sikkim and Chinese Chumbi valley over the hill.

China claims, that the concerned area is not disputed and belongs to China by virtue of 1890 treaty between Chinese and British Empires. Anyhow the fact is, that the concerned treaty is essentially flawed as it puts the border at the top of the mount Gipmochi (which is what Chinese claims) while in the same time it states that border has to follow watershed (which is the claim of India and Bhutan).

Also quite resolutely, Bhutan was not part of 1890 treaty and the treaty is demarcating the Tibet-Sikkim border, so it is not relevant for Bhutan in any way. Clearly the Chinese version of the matter is not based on impartial reading of facts.

Concerned area is truly disputed and should be treated as such according to existing treaties between Bhutan and China.

What is India doing in disputed region?

One of the most troublesome features in the stand-off is that it actually involves Indian army, although the territorial dispute is between China and Bhutan. Chinese claims that Indian intervention is illegal and they are even speculating that India intervened against the will of Bhutan.

It's true that Bhutan government never publicly confirmed that they did seek India's help, but quite tellingly it didn't contradict that also. Given the long term security cooperation between Bhutan and India, it is quiet hard to believe that the Indian move would not be coordinated with Bhutanese side. In any case Bhutan keeps strict silence on this issue, probably trying not to add insult to injury.

Bhutanese diplomacy is traditionally cautious. After the stand-off is over and all territorial disputes are fixed, Bhutan would seek to establish cordial and friendly relationship with China. If it adopted more assertive approach now, it would effectively jeopardize this long term goal.

It is important to stress, that India has it's own stake in Doklam due to precariousness of nearby Siliguri Corridor. If this narrow stretch of land between Nepal and Bangladesh is captured by Chinese forces, it will cut-off India's land access to Assam and Arunachal Pradesh. Control over Doklam would give Chinese troops tactical upper hand, making Siliguri Corridor less defensible.

Indeed most of the Bhutanese people would agree that it should be Bhutanese soldiers, not Indian army, dealing with Chinese border transgression. On the other hand, India has large base connected by all-weather road just over the hill on Indian side of Doklam while Bhutan has just small sentry outpost which can be only accessed by about full day's hike from the nearest road inside Bhutan. This makes it considerably easier for India to deploy the troops on the place and reinforce them quickly in case of need. Royal Bhutan Army, though capable, brave and well trained would struggle to react adequately and quickly in case of escalation.

Such practical issues pretty much explains Bhutanese reasons to seek help of it's long-term ally instead of facing Chinese troops single-handedly.

Should you be worried of war?

Certainly not. The two giants bumped into each other and the sparks were released. War of the words is just in the full swing but in fact, nor China or India had anything to gain from further escalation.

The troops present in Doklam are not armed, pushing and wrestling each other like pupils. It doesn't seem that current impasse was intentional grand design of either party involved and the leaders seems to understands that the war would have disastrous consequences and no winners. While both Indian and Chinese leaders are unwilling to budge as it would be considered as weakness in front of the public and political adversaries back home, both parties seems to seek some face saving solution.

Opportunity will soon be provided by nature itself as the conditions in Doklam are very harsh thorough the winter. By November all the troops will be forced to back-off and whole issue would be forgotten before the snow melts in the spring. Just Bhutan will persist in peaceful negotiations with China, seeking the ultimate settlement of the border issues.

Should you visit Bhutan if you're Chinese citizen?

Sure, please come! Bhutanese people do understand the difference between the country's policy and private citizens. Just please refrain from repeating some of the insulting stuff which was published in Chinese media. Like that Bhutan is Indian colony or protectorate. Or that Gross National Happiness is phoney concept. Or that Bhutanese people are actually not happy. It's not at all true and once you visit Bhutan, you will see yourself. Actually you should fix your human rights mess in Tibet before telling anything to Bhutan – the free, democratic and proud country.

And if you're Indian?

Please come! Ideally hire Bhutanese guide to explain you all dos and dont’s of Bhutanese culture and show you the places which you would not discover yourself. Also please don't tell Bhutanese people that India is protecting them while you're actually in Doklam for your own security reasons. Bhutan and India are friends and allies and Bhutan did sacrifice a good deal of it's sovereign rights on altar of Indian security. Many Bhutanese people are quite uncomfortable to listen to paternalistic tone of Indian journalists and commentators. Please treat Bhutan as independent nation and good ally, not like your younger brother. And please never-ever tell to any Bhutanese, that they might become another Indian state like Sikkim. It certainly won't be digested nicely.

EDIT: On 28 August 2017 the India and Chinese agreed on disengagement. Indian troop vacated the Doklam and Chinese did give up on plan of road building. The status quo was reestablished.